skip to main | skip to sidebar

This month's challenge is brought to us by Karen of Bake My Day and Zorra of 1x umruehren bitte aka Kochtopf. They have chosen Tuiles from The Chocolate Book by Angélique Schmeink and Nougatine and Chocolate Tuiles from Michel Roux.
Traditionally, tuiles are thin, crisp almond cookies that are gently molded over a rolling pin or arched form while they are still warm. Once set, their shape resembles the curved French roofing tiles for which they're named. The Dutch angle: traditionally this batter was used to bake flat round cookies on 31st December, representing the year unfold. On New Years day however, the same batter was used but this day they were presented to well-wishers shaped as cigars and filled with whipped cream, symbolizing the New Year that's about to roll on. And of course the batter is sometimes called tulip-paste.... 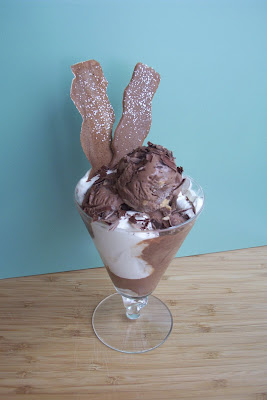 I decided to bake chocolate tuiles (using cocoa powder) and pair it with a cinnamon chocolate gelato with toffee bits. The gelato recipe came from epicurious.com and was a success but a little rich for my taste.
I made the stencil for the tuiles ( which should look like a wavy line, LOL) out of a cereal box. This part was easy but I did have difficulty when it came to shaping the tuile. I originally had wanted to mold the tuile over a rolling pin but quickly found out this was harder than it looked. I went through three separate batches before I decided that it looked great just the way it was. The tuile was light and crunchy with just a hint of chocolate.
I enjoyed this challenge but I don't think I would ever make tuiles again, not enough flavor for me. Hey, but I learned something new!

They look great, and the flavor combo sounds good to me! I want to go back and try the chocolate tuiles made out of chocolate instead of cocoa added to dough, I bet that would have more flavor!

Holly... that looks great! Next time I am volunteering to watch girls and be your taster!